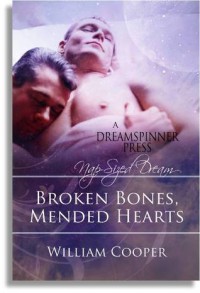 Broken Bones, Mended Hearts is the type of story that doesn't require much thinking and has the perfect resolution to any conflict. Almost.

Noah ends up in the hospital because he was beat up on his way out of the library all because he hit on a straight guy and the man didn't particularly like that. He wakes up from a coma three days later to see his best friend, Mark, waiting by his bedside. From there everything in the next couple of days goes perfectly. The long time crush Noah has on his best friend results with them being a couple and all of his family accepts the fact he's gay.

While the story was okay, I didn't like how everything was just all too perfect. There's not much conflict besides what happens at the beginning and the supposed straight guy, Mark, was automatically okay with jacking off another guy, being gay, and having a boyfriend all in one day. I also would have liked a little more attention towards Noah's injuries. He was hurt very seriously and I'd imagine Noah would have been in much more pain then what was portrayed especially since both his legs were in casts but he was still able to move around some and let his brother sit on his lap with no problem at all.

Overall, it's a nice light, short story even if it's slightly unrealistic.
Tweet
12053 BOOKS
Goodreads